Father Philip G. Bochanski, a native of suburban Philadelphia, received the degree of Master of Arts in Theology from Saint Charles Borromeo Seminary, Overbrook, and was ordained a priest of the Archdiocese of Philadelphia in May 1999. He has served in several parish assignments, as well as in special ministry as a high school theology teacher, a chaplain for cloistered nuns, and a spiritual director for seminarians.

Throughout his priestly ministry, Father Bochanski has been active in the work of adult faith formation, particularly in the catechesis of adult converts. An award-winning author, he has written and edited four books, five audio series and numerous articles on various aspects of Church history, catechesis and spirituality.

Father Bochanski served for five years as chaplain for the Courage Apostolate in the Archdiocese of Philadelphia. Founded in New York in 1980, Courage provides pastoral care and spiritual support for Catholic men and women who experience same-sex attractions and who desire to live chastely in accord with the teaching of the Catholic Church on homosexuality. In January 2015, he was appointed to the position of Associate Director. On January 1, 2017, Father Bochanski was named the new Executive Director of Courage International, Inc., which now includes more than 100 chapters in dioceses throughout the United States, as well as groups in 15 other countries on 5 continents. 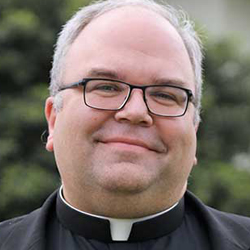