The Most Reverend Frank J. Caggiano was installed as Fifth Bishop of Bridgeport on Thursday, September 19, 2013 at St. Theresa Church in Trumbull, Ct. In his installation homily, the bishop spoke of the need to build bridges to youth, to all those who are troubled and neglected, and to Catholics who no longer participate in the life of the Church.

On February 22, 2014, he formally convoked the 4th Synod of the Diocese of Bridgeport, the first in 32 years, as an opportunity for renewal and pastoral planning. After a series of listening sessions with over 4,000 comments by laity, priests and religious across the diocese, the Bishop announced the Synod 2014 themes of empowering youth, building up the community of faith, fostering evangelical outreach, and promoting works of charity and justice.

More than 8,000 faithful turned out for the Synod Closing Mass Celebration at Webster Bank Arena on September 19, 2015.

In response to the synod, the diocese has launched the Catholic Service Corps, the Leadership Institute for lifelong formation, ongoing Strategic and Pastoral Planning, the creation of a social media platform to engage youth and young adults, and other initiatives to make the Church more welcoming and to renew the liturgical and pastoral life of the diocese.

In an historic move of reconciliation, Bishop Caggiano met with the membership of Voice of the Faithful in March 2014, to discuss issues that have divided the local Church for decades. His efforts have led to increased dialogue and the formation of a Survivors Group that has helped to lead the reconciliation and healing process. The bishop also reconstituted the Review Board of the Diocese to oversee implementation of diocesan Safe Environments policy, and announced the formation of a new Ministerial Advisory Board to review cases in which the Bishop must consider action regarding the assignment of a priest or deacon.

Under his leadership the diocese has also taken major steps toward increased financial transparency by publishing yearly financial statements and audits for its operations and programs.

In 2017, the diocese launched Foundations in Education, which has helped to usher in a new era for Catholic Schools by fostering innovation, creating scholarship funds and supporting the reorganization of schools to meet present and future needs. The bishop also served as point person in the process of consolidating Catholic schools and strengthening the diocesan schools system as it faces future challenges and opportunities.

In the spirit of renewal and accompaniment, Bishop Caggiano recently launched the Face of Prayer campaign to celebrate the power of prayer in the lives of young people though use of videos and social media. In September 2017, he led a delegation of more than 2,000 men and women to the National Shrine of the Immaculate Conception in Washington D.C. to commemorate the 100th Anniversary of Our Lady of Fatima.

Bishop Caggiano came to Bridgeport from the Diocese of Brooklyn, where on June 6, 2006, he was named Auxiliary Bishop of Brooklyn and Titular Bishop of Inis Cathaig by Pope Benedict XVI. He received his episcopal consecration on the following August 22, from Bishop Nicholas DiMarzio, with Bishops Thomas Daily and Ignatius Catanello serving as co-consecrators.

He was born in the Gravesend section of Brooklyn on Easter Sunday March 29, 1959, the second of two children of Arnaldo and Gennarina Caggiano, both of whom came to this country in 1958 from the town of Caggiano in the province of Salerno, Italy. He grew up in Saints Simon and Jude Church and attended the parish’s grammar school. The Bishop’s education continued at Regis High School in Manhattan, conducted by the Jesuits, where he was a member of the class of 1977.

After graduating from Cathedral College, the Bishop worked for 18 months as the sales representative for the Gregg Division of McGraw Hill Publishing Company, serving the entire New York metropolitan area. At the end of this brief period of secular employment, the bishop began his major seminary studies at the Immaculate Conception Seminary in Huntington, New York. He was ordained to the priesthood on May 16, 1987 in the chapel of the Immaculate Conception Center in Douglaston, Queens.

A noted catechist, Bishop Caggiano was invited by Pope Benedict XVI to deliver World Youth Day talks in Sydney in 2008, Madrid in 2011, and by Pope Francis to serve as a catechist at World Youth Day in Rio de Janeiro, 2013. In 2016, he led a delegation of almost 300 young people to World Youth Day in Krakow, where he served as a catechist. In the summer of 2017, he was a featured speaker at World Youth Day REUNITE in Washington, D.C. He has also preached at the Youth 2000 Summer Festival in Tipperary, Ireland. In November 2013, he was appointed to a three-year term as episcopal advisor of The National Federation of Catholic Youth Ministry.

Bishop Caggiano presently serves on four committees of the United States Conference of Catholic Bishops (USCCB): Committee on Evangelization and Catechesis; Subcommittee on the Catechism; Committee on Laity, Marriage, Family Life and Youth. 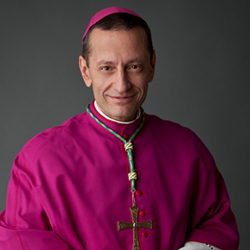