The  oldest  of the four  children of Robert  and Trudy Fisher, Robert  Joseph Fisher was born in  Detroit and attended Epiphany  and St. Bede Elementary schools  before graduating from the University  of Detroit Jesuit High School.

He  went  on to  the University  of Detroit, where  he earned a Bachelor  of Science in Management  Science. During his summers,  he worked for the Catholic Youth  Organization at their summer camps near  Port Sanilac, Michigan. After graduating, he  worked full time for the CYO overseeing the Camping  Services Department.

While  working  for the CYO  he began his discernment  of the diocesan priesthood  and entered formation at Sacred  Heart Major Seminary in the fall  of 1986, earning a Master of Divinity  degree.

After  being ordained  a priest for the  Archdiocese of Detroit  by Adam Cardinal Maida in  1992, he was sent as associate  pastor to Our Lady Star of the Sea  Parish in Grosse Pointe Woods. In 1995,  Cardinal Maida assigned him as the Director  of Priestly Vocations for the Archdiocese.

During  his pastorates,  he has been a seminarian  mentor at Sacred Heart Major  Seminary, and served on the Program  Review Committee and the Presbyteral Council.  Currently he is a member of the Catholic Schools  Council and the Board of Directors of the Catholic  Youth Organization. 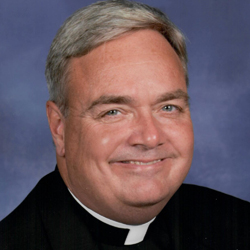