He was appointed an auxiliary bishop of the Archdiocese of Chicago on Jan. 24, 2003 by Pope John Paul II, and ordained on March 19, 2003 by the archbishop of Chicago, Francis Cardinal George, OMI.

Born Dec. 21, 1956 in San Luis Potosi S.L.P, Mexico to Gustavo García Suarez and Maria Cristina Siller de García, Archbishop Gustavowas the eldest of 15 children. He grew up sweeping floors, washing windows among other responsibilities in the family furniture store until he was 16 years old. He attended Colegio Motolinia Elementary School and graduated from Colegio Motolinia High School In San Luis Potosi. The Archbishop received his Formator Certificate from Escuela de Verano Para Formadores. He earned a master’s degree in Theology and Divinity from St. John’s Seminary in Camarillo, Calif., and received his master’s degree in Philosophy from Instituto de Filosofia, Guadalajara, Mexico. The archbishop attended ITESO, a Jesuit university in Guadalajara, Mexico, where he earned hismaster’s degree in Psychology.

In 1975 Archbishop Gustavo professed as a member of the Missionaries of the Holy Spirit. He was sent to the United States by his order in 1980, where he worked closely with the immigrant community. He was ordained a priest on June 22, 1984 in Guadalajara. He became a citizen of the United States on Dec. 15, 1998. His more than 26 years of priestly service has taken many forms, including ministering to communities with varied cultural backgrounds. While in California he served in Fresno and at three parishes in the Los Angeles area. He also worked in Oregon for three years. Through those many years he gave parish missions to Catholic parish communities throughout the United States.

Much of the archbishop’s work with his order involved the formation of the men of his religious order. From 1978 to 1980 he taught at INUMYC Minor Seminary in Guadalajara, Mexico and at the Institute for Philosophy in Guadalajara. He served as a formator and teacher at Institute of Philosophy in Guadalajara from 1988 to1990. He also was Rector of the Missionaries of the Holy Spirit in Lynwood and Long Beach (1990-1996) and held that same position at Mount Angel in St. Benedict, Ore. (1996-1999).

Archbishop Gustavo has held several leadership positions in his religious order. From 1999 to 2003 he served as Major Superior of the Missionaries of the Holy Spirit, administering an area that at that time included the United States and Canada. He was elected the order’s Provincial in 2003.

He was then named Auxiliary Bishop. In his new role, he served as Cardinal George’s liaison to the Hispanic community, and was assigned to Vicariate V, which covers the south side of Chicago and its southwest suburbs. This area includes 79 culturally diverse parishes.On a national level, Archbishop Gustavo served on a number of committees for the United States Conference of Catholic Bishops (USCCB): The Cultural Diversity Committee, Hispanic Affairs, African American Affairs, Committee on Hispanics and the Liturgy, the Committee on Migration (USCCB), and served as Chair of Region 7 of the USCCB, which includes Illinois, Wisconsin, and Indiana. He also served on the Committee on Consecrated Life. 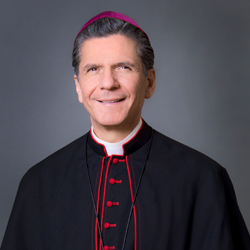