Sisters of the Holy Family of Nazareth

Sister Josephine is a native Texan, born and raised in Houston. She moved to Dallas in 1999 to begin studies at the University of Dallas, where she completed a BA in politics with a business concentration. Sister subsequently entered the banking industry where she served for ten years as a vice president in the home loans division Bank of America in the roles of operations manager of staff of staff of 200 and later as a project manager. After growing up Baptist, Sister Josephine entered the Catholic Church in 2005 and in 2011 began her formation to be a religious sister with the Sisters of the Holy Family of Nazareth. She professed her first vows in October 2015. She has since served for two years as the public relations coordinator for the retreat center ministry in Grand Prairie. Sister Josephine is now studying to be a clinical mental health counselor, participating in an internship with the Children’s Advocacy Center of Smith County. She also serves in vocation ministry in her community and serves as a speaker, primarily for youth and young adult retreats and conferences throughout the Dallas-Fort Worth area and around the country.

To learn more about the Sisters of the Holy Family of Nazareth, visit nazarethcsfn.org 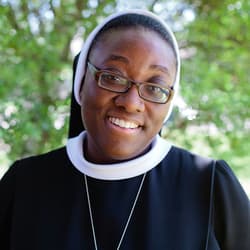