On November 24, 2014, Pope Francis appointed Bishop Donald J. Hying as the fourth bishop of Gary. He was installed on Jan. 6, 2015. He shepherds nearly 185,000 Catholics across four counties in Northwest Indiana.

A native of West Allis, Wisconsin, Bishop Hying was the sixth child–all boys–born to Albert and Catherine Hying. He was ordained to the priesthood in 1989 for the Archdiocese of Milwaukee, where he served in numerous parishes. Fluent in Spanish, Bishop Hying also served at La Sagrada Familia in the Dominican Republic, a sister parish to the Archdiocese of Milwaukee. After serving as dean of formation at Saint Francis de Sales Seminary where he was later appointed rector, he was named auxiliary bishop of Milwaukee by Pope Benedict XVI in 2011.

Bishop Hying serves as the Episcopal Liaison for the National Association of Catholic Chaplains and as Episcopal Advisor to the U.S. Society of St. Vincent de Paul. He is also a member of the United States Conference of Catholic Bishops’ Subcommittee to Aid the Church in Central and Eastern Europe. 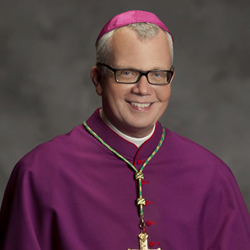