Seminarian for the Diocese of Bridgeport

Colin B. Lomnitzer is a native of Connecticut. In 2005, he and his family were received into Full Communion of the Roman Catholic Church after having been members of the Episcopal Church (Church of England). Colin went to Fairfield College Preparatory School and began his undergraduate career at The Catholic University of America in Washington, D.C. After two years at CUA, he entered the Saint John Fisher Seminary program in Stamford, CT, for the Diocese of Bridgeport, where he completed his B.A. in Philosophy. Colin is currently studying Theology at St. Joseph’s Seminary & College in Yonkers, New York. God willing, Colin will be ordained a Priest of Jesus Christ for the Diocese of Bridgeport in 2022.

To learn more about discerning a vocation to the priesthood, Click Here 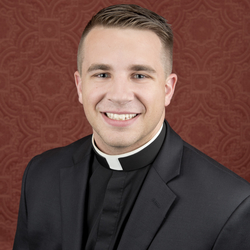