Bishop Medley was born on Sept 17, 1952 in Marion County, Ky. to Dorothy C. Hayden Medley and James Werner Medley. He was baptized at St. Francis of Assisi Church, St. Francis, Kentucky. After attending St. Thomas Seminary High School, Bishop Medley received a bachelor of arts in philosophy and psychology from Bellarmine University in Louisville and a master of divinity from Saint Meinrad School of Theology in St. Meinrad, Ind. Before his ordination in 1982, Medley served as a social worker for the Kentucky Department of Human Resources from 1974 to 1978. Bishop Medley was ordained to the priesthood on May 22, 1982, at the Cathedral of the Assumption by the Archbishop Thomas C. Kelly, O.P. After ordination Medley became associate pastor at St. Pius X Parish in Louisville from 1982-1985 while serving as chaplain at Assumption High School.

In June 1985 he was assigned as associate pastor at the Cathedral of the Assumption, Louisville, where he served until 1988. In June of 1988, he was assigned as pastor of Saint Benedict Parish, St Charles Borromeo Parish and Holy Cross Parish, Louisville who merged together, in 1990, to become St. Martin de Porres Parish. In 1989, Bishop Medley was appointed director of the Office of Clergy Personnel.

In September 1993 until June of 2005 Bishop Medley was pastor of St. Joseph Proto-Cathedral in Bardstown, Ky., the original See of the Archdiocese of Louisville.

In June 2005 Bishop Medley was appointed pastor of Mother of Good Counsel Parish in Louisville, and in 2007 he became pastor of Transfiguration of Our Lord Parish in Goshen, KY. These two parishes merged and became St. Bernadette Parish.

Bishop William F. Medley was ordained the fourth bishop of the Diocese of Owensboro on February 10, 2010 following the December 15, 2009 announcement from the Papal Nuncio, Archbishop Pietro Sambi. 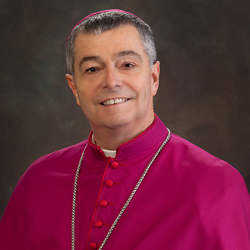