Reginald was born on September 3, 1966 (Feast Day of Pope Gregory the Great, Doctor of the Church) in Durham, North Carolina. His family relocated to Connecticut while he was a baby and lived in Norwalk for a while and then settled in Stratford, CT. Reggie attended public schools and elected the First Black Student Council President of Stratford High School where he graduated with honors. Reggie then attended the University of Connecticut in Storrs where he was involved in various student organizations including the Student Union Board of Governors and served as President of Sigma Alpha Epsilon National Fraternity. He graduated in 1988 with a B.A. in Communication Sciences.

Reggie’s first professional job was as a Production Inventory Control Specialist at Miles Pharmaceuticals (Bayer Corporation). He then pursued a career as an editor and ultimately a Senior Business Development Manager at Comtex Scientific, a UPI Company. Upon the company’s closing Reggie moved to Pitney Bowes as an Area Sales Representative and then moved to MicroWarehouse as a salesman in the Fortune 500 division. He was promoted to Sr. Sales Manager of the Government Division. Reggie then pursued a sales career at Oxygen Electronics as an International Sales Representative and Obsolete Component Specialist. His next career move was as a Regional Sales Manager for Transcentive, Inc. where he sold custom software to Corporate Secretaries. A return to the computer industry led him to Solutions4Sure, Inc., an Office Depot Company, where he started, managed and developed the Government Sales Division with sales in excess of $30 million. He then went to work for Ener-G Tech, Inc., a small home improvement consulting company with a focus on kitchen design and fireplace conversions. He left the business world upon Ordination and was appointed the full time Administrator at Blessed Sacrament Roman Catholic Parish in Bridgeport, CT.

Reggie converted to Catholicism in 1990 at St. James Roman Catholic Church in Stratford where he served as a Lector, Eucharistic Minister, Acolyte, Junior High Catechist, Parish Council, Strategic Planning Committee and Building Renovations Committee. Reggie has volunteered with various community organizations including Stratford Emergency Services for 15 years as an EMT-I, the Red Cross, YMCA, Literacy Volunteers, Sterling House Community Center and MADD. He is currently working as a Mentor at the local high school and has served for 18 years as the treasurer of the Stratford South End Community Center. He has received various community awards including the D.A.R. Good Citizens Award, Congressman Medal of Honor and various service awards throughout the community.

Currently Reggie is the Vicar of the African American Apostolate of Catholics for the Diocese of Bridgeport and the Pastor of Our Lady of Fatima Roman Catholic Church in Wilton. Previous assignments as administrator were held at Blessed Sacrament, Our Lady of Good Counsel, St. Patrick and Holy Rosary. Currently he serves on the following committees for the Diocese of Bridgeport: College of Consultors, Presbyteral Council, Council of Vicars, Priest Advisory Committee (Vice Chair), Education Committee, School Advisory Board, Deacon Review Committee, Facilitator or Lecturer for Deacons in training, Priestly Living Committee, Synod Representative and various other committees as assigned by the Bishop. Fr. Norman serves as the Governance Chair of the National Association of Black Catholic Administrators as well as a representative to the National Black Catholic Congress. He is an avid reader and hockey fan. He lectures frequently on a variety of topics such as Men’s Spirituality, Black Genocide, Operating in a Culture of Jesus and various Family dynamics topics. He serves on the board of various non-profit organizations including Malta House, Catholic Charities and the Stratford South End Community center. He loves working with children and the elderly to affirm the special gifts they bring to the table. 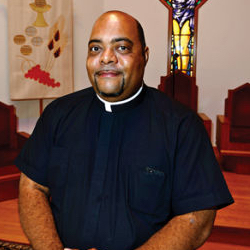