Bishop Pates was ordained to the priesthood on December 18, 1968 in St. Peter’s Basilica, Vatican City. This year, he celebrates his 50th anniversary as a priest. He was awarded a Licentiate in Sacred Theology (STL) in dogmatic theology, Gregorian University, Rome, in the summer of 1969.

After serving as a priest for five years in the Archdiocese of St. Paul and Minneapolis, he was appointed Secretary of the Apostolic Delegation in Washington, D.C. under the direction of Archbishop Jean Jadot, Apostolic delegate 1975-1981.

Bishop Pates was the Rector at St. John Vianney Seminary, affiliated with the University of St. Thomas, 1981-1987 and archdiocesan Vicar for Seminaries 1987-1991. He was Pastor of Our Lady of Peace Parish in Minneapolis (a merged parish) and is the founding pastor of Saint Ambrose of Woodbury Parish, where he served from 1991-2001.

Bishop Pates was named Auxiliary Bishop of St. Paul and Minneapolis in 2000 and became Bishop of Des Moines in 2008. 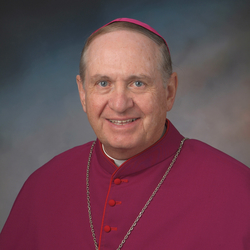